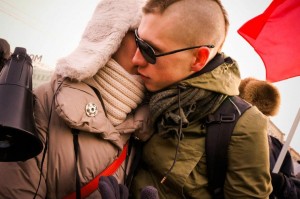 is an actionist artist and political activist, whose political acts have earned him time at Buturskaya Prison and the Alternative Prize of Activist Art. He is the current organizer of the dissident tradition of “Mayakovsky Readings” in Moscow.

Matvei Krylov is an actionist artist and political activist. He started working with political issues in 2003, and is a frequent participant of peaceful seizures of administrative buildings and government institutions. Krylov is the author of the performance Head Count at M&J Guelman Gallery; was a co-organizer of exhibition Party Riot Bus in support of Pussy Riot; the winner of the Alternative Prize of Activist Art; participant of Media Impact Festival of Activist Art. He is also the organizer of protest poetry evenings at the statue of Mayakovsky (a long-standing oppositional tradition) on Triumfalnaya Square in Moscow, called the “Mayakovsky Readings”.

Arrested in 2011 for insulting a prosecutor, he spent time at Buturskaya Prison in Moscow. Earlier, he was sentenced to a one-year term after having been accused of extremism (his sentence suspended following protests).

At the moment, he works with LGBT-rights and at the struggle against narcophobia. Krylov is a co-author of a number of collective art projects. He describes himself as an anarchist and anti-fascist.