From Non-Aligned to Re-Aligned Art and Politics

RE-ALIGNED is a thematic project including exhibitions, art in public space, workshops, conferences, artist-in-residencies and publications initiated by Perpetuum Mobilε.

ITERATIONS of the RE-ALIGNED Project 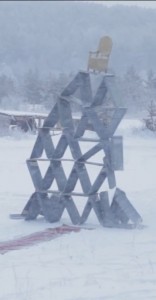 Thematic Concept of the RE-ALIGNED Project

The RE-ALIGNED Project looks into conditions, agencies and subjectivities provoking a new alignment of art, thought and politics in the 21st century. In its discursive aspect, it addresses the lack of concepts for describing the shift away from the “post-ideological” ambiguity of the late 20th century. For although the “postmodern moment” has passed, and contemporary currents show a re-politicized alignment of intellectual allegiances, a shared language for our very different times remains undeveloped. Symptoms of this “re-alignment” can be seen across continents. Following the near-collapse of global markets in 2007-8, especially, multiple waves of resistance and rebellion against diverse forms of oppression, enslavement and injustice have washed the world. From dramatic battles for basic freedoms and human-rights, to anti-corruption movements, to rising awareness of corporate control, to forceful demands for advanced forms of equality and justice, not dissimilar grievances and demands have been brought “to the square” in a wide range of societies. Today, as in previous times of great public upheavals, such as circa 1789 and 1848, 1968 or 1989, artistic advocates of freedom have taken their ideas into full public view. One can point to the prominent role artists played in the revolts which shook the Arab world, as much as in the creative milieu of Occupy, which called called into question the corporate-led “Washington Consensus” of the post-Bretton Woods economic system. Comparable dissenting artistic agents of change have taken shape as far apart as China and Russia, Europe, the US and Latin America. The internet and internet-media is another, highly significant site of these struggles. Many of these movements grew out of long-standing global concerns, including those of the vocal ecological and peace movements, as well as anti-corporate and grassroots democracy initiatives. Responses to the current predicament are multiple. Despite widely varying historical circumstances and genealogies, they share commonly recognisable positionalities, subjectivities and agencies – and in the world of contemporary art, artistic strategies.

From Particulars to Universals

As a period, the postmodern saw a sustained focus on cultural-ethnic issues, post-colonial national-independence narratives, post-communist nation building and religious revivals, gender-related liberation movements and also numerous new ways of reading popular and commercial culture and society. While subverting and superimposing and making these configurations clash, the identity-political particularisms they drew on were frequently reproduced rather than properly ‘deconstructed’. Today’s forms of identification are moving towards a less particularized, less niche-based positioning/imagination of the self. We will say that the current approach of re-aligned contemporary art and intellectual consciousness is one of multilectic hybridity. This term invokes the proposition of a ‘multiple reading in one’ of the very diverse intellectual and artistic positionalities of our time. A ‘multi-lectic’ being literally a strategy of ‘many-readings’, it is different from the received notion of postmodern hybridity and its concomitant relativism, due to its tendency to identify common structures and narratives that diverse experiences share. This tendency avoids simply reproducing the isolation of a given experience through the notion of the uniqueness or ‘particularisms’ of a given genealogy or heritage, but also avoids homogenising differences in one ‘melting pot’ of identities. Rather, it gathers singularities within an increasingly (although never absolutely) universal, comparative and dynamic multilectic perspective and hence agency. Refraining from exalting one particular positionality, politics or strategy at the expense of all others – including that of their own local genealogy or heritage – a multilectic agency will tend to refuse domination from any single force on the geographical, cultural or ideological compass.

From Non-Alignment to Re-Alignment

What is being described in the above is in fact the double (or multiple) refusal of two (or more) mainstream positions. In non-western localities such as Russia or China, for example, many may reject authoritarianism while simultaneously maintaining a critical stance vis-a-vis western neoliberal forms of expansion and enslavement, both past and present. This provides us with another set of core concepts. Firstly, there is the notion of a non-aligned positionality, which is what is described above. This non-alignment, which often leads to an effective withdrawal from engagement in ‘real politik’ of power and the mainstream of social life, has been the position of many postmodern intellectuals for the past decades. It is clear that every real-world instance of alignment is structured by a particular genealogy and set of historical circumstances. In many (but not all) cases there is a experience of former binarity. The Cold War created for many countries the need to make a radical choice between “communism” and “capitalism”. However, following 1968, both in east and in west, a widespread pessimism set in, leading to a withdrawal from counter-hegemonic movements. The Soviet collapse took both sides unawares. However, after an early post-Soviet naïveté, a repeated stance of non-alignment has become important in intellectual discourse: an agency counter to neoliberal capitalism as much as Soviet-style communism, but directed towards new possibilities. The Spanish “indignados” and the entire “Occupy” movement likewise reject both old-fashioned authoritarian leftist traditions just as much as the failed capitalist status quo, giving new impetus to a root-and-branch intellectual re-alignment. In the Arab world, a different binarity has been played out. Since the Arab revolutions of 2011, the most important forces of the revolutionary youth have aligned their repeated rebellions against the authoritarian army neither with Muslim fundamentalism nor simply with pro-western ideologies. In short, the rejection of multiple mainstreams carries with it the potential and necessity for the formation of re-aligned agencies vis-a-vis dominant or hegemonic powers and ideologies.

Practices of Re-Alignment: A Generation “Pre-”?

If voting “against all” (which incidentally was an art action by the Russian group Radek in the 1990s) seemed the only choice of a disillusioned postmodernist generation, the question clearly arises: What comes after the multiple negatives? Contrary to the fin de siècle pessimism of what one might call the non-aligned “generation of the post-s”, today there is an increasingly visible proliferation of common initiatives. The post-modern, particularizing analysis is finally being superseded by what might be thought of as a  thinking: thinking in terms of global commonalities and wholes. One could call ours the time of a re-aligned “generation pre-”. These newly aligned intellectual tendencies – for they are not, of course, restricted to a generation defined by age – seek to create a new commons. Common strategies, prominent also in art, include new participatory forms of democracy, art and action; increasingly broadening principles of inclusion; and re-imagining radically different, sustainable forms of civilizational development. Agents of change are often built as peer-to-peer networks, intertwining in proto-anarchist fashion, although usually inter-dependent on both states and commerce, Wikipedia and Open Source software being only the best known cases. Basic freedoms and fundamental rights lie at the foundation of possibility, fought for by the likes of Pussy Riot, Wikileaks or Gulf Labor. In terms of systematic global change, at the very least, ‘Robin Hood’ taxes on transnational corporations are part of the equation. A new redistribution of wealth through ‘Citizen’s Salaries’ is only one important way of re-inventing welfare for the 21st century. Importantly in these times of dire economic crises and rising extreme nationalism, this “generation” harbours notions of post-national, or rather, pre-mondial citizenship. In short, the proposition is to turn the tables on multiple negatives of “non-aligned” postmodernism, to engage collectively for a multiple set of commonly desirable “re-aligned” futures.

Co-curators of the RE-ALIGNED Project