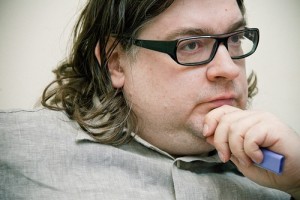 has been a figure of reference in the Russian art world since the early 1990s, co-founding and leading several groupings, including Radek Magazine (1995), which sought a space for intellectual resistance and anarchist tactics. Currently, he runs the BAZA Institute.

Anatoly Osmolovsky began his career as a writer, and was a member of the literary group “Vertep” before 1989. Between 1990-92, he was the leader of the ETI (Art Territory Expropriation) movement, and participated in a series of street performances/provocations, including “Fuck,” “We feel colds,” “Index Finger,” and “Perusing with Fire.”In 1995, Osmolovsky founded Radek magazine, which sought to create a space for radical politics under a current atmosphere of official suppression, and to develop paths for intellectual resistance and anarchist tactics for decision-making. The distribution of Radek began as a mail-art project due to lack of sponsoring. In 1997, Oleg Kireev joined Mailradek, which was thereafter continued in the form of electronic mail distribution, expanding its scope by making open invitations for contributions by other authors.