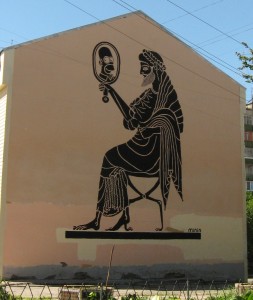 is best known for his iconic work “Homer” (Perm) and “SnowDen” (Re-Public/Re-Aligned, Helsinki). He works in many genres, from graphic works lamenting the disappearance of his native Donetsk mining culture to street art and oils.

Roman Minin (b. 1981) from Kharkov, Ukraine, is a participant of many group exhibitions and festivals, the organizer of “Street Art Fest” in Kharkov. He was for example the head of the program “ISOLIATSYA in city space” in the center of the modern art ISOLIATSYA in Donetsk 2012.