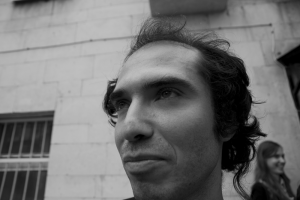 is an internationally renowned Russian poet, translator and socialist from Moscow. An English anthology, “It’s No Good” was published by Ugly Duckling Presse in 2012. Medvedev is the founder of the Free Marxist Press and the riot-punk-folk band Arkady Kots.

Kirill Medvedev is a revolutionary Russian poet, translator and hard-core socialist from Moscow. His extensive poetry anthology It’s No Good was published by Ugly Duckling (New York) last year. It’s No Good includes selected poems from Medvedev’s four books of poetry as well as his most significant essays: “My Fascism” (on the failure of post-Soviet Russian liberalism, politically and culturally); “Literature and Sincerity” (on the attractions and dangers of the “new sincerity” in Russian letters); “Dmitry Kuzmin, a Memoir” (a detailed memoir and analysis of the work of the 1990s Moscow poet, publisher, and impresario Kuzmin, and what his activity represents).

Kirill is also a founding member of riot-punk-folk band Arkady Kots. Arkady was also a Russian revolutionary poet and translator, for instance this was Arkadiy Kots himself who translated L’Internacionale into Russian, this first version lately became national anthem for early Soviet state. By the time band Arkady Kots gave their first gig as a band, in year 2009, there were just two of them on stage Kirill Medvedev – singing and playing acoustic guitar, and Oleg Jouravlev – young Russian sociologist on keyboards made all the arrangements. Now there are nine musicans on the stage.