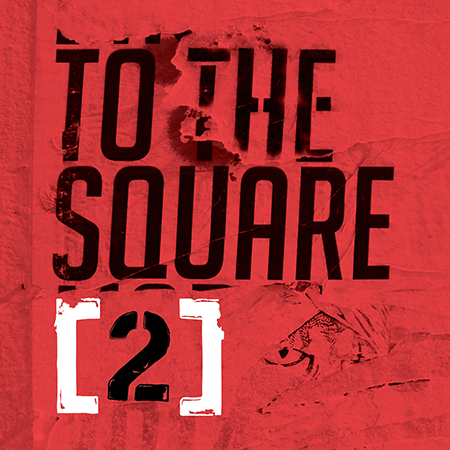 Ganzeer, with added design by Tzortzis Rallis, “To the Square 2”. 2014. Poster. Courtesy of the artist/project.

TO THE SQUARE 2 (#TSQ2) re-invigorates the question of public space as a crucial locus for the articulation of the political and the art of protest.

After the protest movements which broke out in capitals across the world from 2011 onward, we live in a period of reactionary politics and at times violent repression. The question today is, what would it take for people to go TO THE SQUARE 2 – that is, to take to the streets again? Do we need to see heightened extremes of economic inequality, ecological catastrophes, raw racism or an infinitely bigger “big brother”? Where are all those people who took to the square: pacified, in prison, in exile? For where did it all come from, and where does it go — that revolutionary energy?

TSQ2’s curators have commissioned new works by artists deeply involved in forms of resistance and movements “to the square” to grapple with these questions: Egypt’s famed and much-loved street artist Ammar Abo Bakr (Luxor/Cairo); Núria Güell (Barcelona), joining the project in absentia (as usual) from Cuba, with interventions in Europe’s economic dislogic; the renowned Palestinian artist Khaled Jarrar (Ramallah), who has defeated Israel’s travel-ban [link: https://www.re-aligned.net/khaled-jarrar-barred/] to create a public performance seeking 50 volunteers to match his 50-army-uniform strong installation; Vladan Jeremić & Rena Rädle (Belgrade), whose biting political satire, also seen in ArtLeaks (Jeremić is a co-founder), is uncomfortably reminiscent of 1914; Nikolay Oleynikov (Moscow), whose mobile “Radio Pravda” is an agitprop broadcast-collage in memory of the likes of Grosz and Benjamin; the urban transformers Raumlabor (Berlin) whose mobile cinema-theatre will stage interventions with Helsinki’s citizens; and the sincerely hilarious ZIP Group (Krasnodar) and its “wild constructivism” in the centre of Lasipalatsi Square.

The grand opening of all works will be on the 29th August, followed by a concert by the prominent singer of the Egyptian Revolution, Ramy Essam.

19–31st August RADIO PRAVDA https://www.re-aligned.net/radio-pravda/  [link as it is]

22nd Debate: THE FUTURE OF THE SQUARE.

Following BACK TO (THE) SQUARE 1 [link: https://www.re-aligned.net/programme-b2square1/ ], TSQ2 is Perpetuum Mobilε’s second commission by Checkpoint Helsinki.