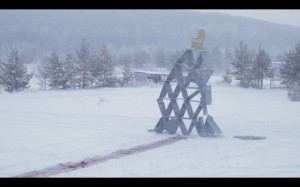 RE-ALIGNED is a thematic project including exhibitions, conferences, artist-in-residencies, workshops and publications co-initiated by Perpetuum Mobilε and Tromsø Kunstforening

which, with the help of the Norwegian BarentsKult foundation and the Norwegian Arts Council, is furthering the first regional focus of the RE-ALIGNED project on Russia, Ukraine and Belarus.

Read the in-depth general thematic concept of the RE-ALIGNED in the DISCOURSE section of the website here.

The RE-ALIGNED project looks into conditions, subjectivities and agencies provoking a new alignment of art, thought and politics in the 21st century. Overcoming identity-particularisms and old geopolitical fault lines, contemporary currents exhibit common alignments based on ideals and ideas. The “post-modern moment” has passed. The horizon lies not behind, but before us. We are in a state of “pre-”.

Across continents artists, activists and thinkers of all stripes share mutually recognisable orientations – most often non-alignedto both authoritarian governments and rapacious corporations, and re-aligned by narratives pointing towards the universal, or what one might call the “pre-mondial”. This long overdue shift has spurred ever more urgent demands for fundamental restructuring, from Wall Street to the global “street”, with the symptoms of the crises seen in the revolts shaking the Arab world, Spain, Chile, China or Russia.

The first regional focus of the RE-ALIGNED Project:

The RE-ALIGNED ART exhibition, opening September 13, 2013 in Tromsø Kunstforening, focuses on the artistic strategies of contemporary engaged and activist artists from Russia, Ukraine and Belarus. The current re-alignment of art and politics, anathema to a previous Russian postmodern mainstream, today tactically combines art and subversion, art and micropolitics, art and education, art and provocation and art and propaganda. In Tromsø, RE-ALIGNED ART will spread out over several sites, routes and ports: from the neoclassical Art Hall to local galleries and theatres, to the walls and squares of the city, into the fields and skies… and the walls of far-flung capitals.

New commissions and works seen for the first time outside of Russia, as well as by now classic pieces, will be contextualised through a dedicated audio-visual Action-Documentation Stairwell and a Re-Reading Room, as well as an Art and Practice Symposium at the Kunstforening and a parallel academic symposium co-organised with Tromsø University.

The RE-ALIGNED project investigates notions of the “pre-”, such as multi-lectics, hybridity and the re-engagement in political, as much as basic anthropic realities. It addresses the dearth of concepts for grasping the shift away from identity politics, “post-ideological” ambiguity and relativism of the outgoing era.

The “free market” collapsed in 2007-9, two decades after the collapse of “real socialism”, leaving the Cold War of binary ideologies with no winners. Hence the (often ironic or subversive) stance of non-alignmentto any “meta-narrative” has likewise lost significance. Filling the ideological vacuum from the right are racist and revanchist fictions. Re-engaged narratives, however, are becoming by necessity realistic and holistic in a time of mondial crises – ecological, economic and intra-cultural.

Speakers in the first phase of the project include Viktor Misiano, Petr Verzilov (Voina, associated with Pussy Riot), Grey Violet (Voina), Dmitry Vilensky, Tatiana Volkova and academics such as Prof. Hilary Pilkington among many others.