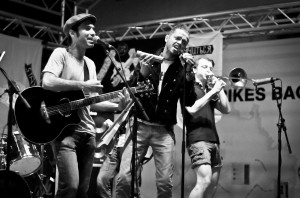 Who the hell this Arkadiy is? Good question! If you ask about the person, we  may answer: well, he was a Russian revolutionary poet and translator, for instance this was Arkadiy Kots himself who translated L’Internacionale into Russian, this first version lately became national anthem for early Soviet state. And recently, just a couple of years ago another revolutionary Russian poet, translator and hard-core socialist named Kirill Medvedev took Arkadiy’s name for the his new riot-punk-folk band. By the time they gave their first gig as a band, in year 2009, there were just two of them on stage Kirill Medvedev – singing and playing acoustic guitar, and Oleg Jouravlev – young Russian sociologist on keyboards made all the arrangements. First bunch of tunes was based on poems of another famous Russian poet, artist-anarchist of previous generation Alexander Brener (since late 90’s based in Vienna). Nikolay Oleynikov – Moscow based international artist, and antifascist activist soon joined the band with his set of percussions and mouth harmonicas, and became a frontman. Now there are 9 people on stage – a whole little orchestra.

Besides Brener’s poetry, another solid part of Arkadiy’s repertoire now contains international riot classics translated for new Russian political context by Kots band members. From early anarchist ballades, to Woody Guthry’s evergreens and Mikis Theodorakis’s pieces. And for Kots band members as dedicated leftist activists it is always important to underline that they follow certain cultural lineage, the tradition of culture, struggling for equality, antiauthoritarianism and liberation. That is how Arkady Kots once became a big name for recent Russian protest audience. Once Medvedev and Oleynikov went to support Pussy Piot infront of the court bulding. As they started a little concert, police came immediately and threw them to the police van, and they naturally continued their gig in there. “Happily” their fellow jornalist Vlad Chizhenkov was there already with his camera to document a fragment, which became a hype right away. They were singing a’capella: these walls will fall down, fall down, fall down, and then we’ll breathe freely. The song was originally Catalonian antifrankist anthem; written back in 1968 – L’Estaca – translated by Medvedev.